Well, how about that? We’ve beat the odds and have made it through two years in business!

Let me tell ya, there have been a lot of challenges and, quite frankly, some times that I thought we wouldn’t make it this far but we’re still here and we’re buckling in for the ride that is ahead for year number three!

We’ve adapted as we’ve gone along, sometimes not willingly but having things forced upon us doesn’t always leave you with many options. We DO hope that our timpani find their way back to us (along with a lot of other things!) soon! But enough of that, eh?

As I sit here in the middle of the night (what has quickly become my “creative time”) I’m reflecting back over these past two years and I’d like to share with you the highlights of our first two years of being in business!

We opened the studio on August 1st with 35 students registered and 10 teachers and 3 part time front desk people on staff. In November we held our first recital in Strive Women’s Fitness – the two Karen’s are some of the nicest people we’ve met while in business and still highly recommend Strive! Over the first four months in business we jumped from our original 35 students to over 60! We were approached by the Warrensburg R-6 Adventure Club and invited to offer classes in piano, violin, and guitar there. 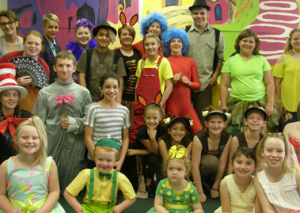 We added musical theatre to our studio in February and our enrollment numbers climbed to over 100! When the end of February came around we nearly broke the $10K gross income level (missed it by $113). It was also our first month of operating in the black, and we rejoiced!!! Our students gave their first public performance at Old Drum Days in April. We also made new friends at the Johnson County Historical Society who offered us a place to have our first summer outdoor theatre season.

When we were told that we weren’t allowed to give theatre classes or produce shows at our original location, we met a new friend in Jeff Franklin and leased space for the summer in City Centre Office Suites. We presented two musicals in June, 2017: Seussical Jr. and Getting to Know: The Sound of Music. Our students performed for over 1500 people over the course of eight performances! 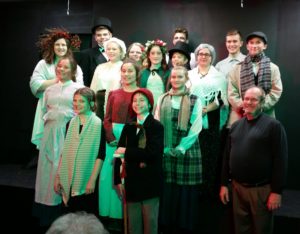 The cast of our 2017 production of A Christmas Carol. 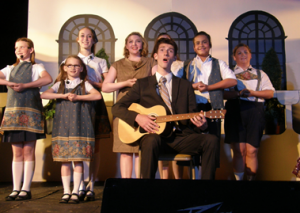 The Von Trapp Family Singers from 2017 Sound of Music.

of A Christmas Carol. This prompted us to move forward with leasing the downtown space in City Centre on a long-term basis and we created our black box theatre and downtown studio there!

We also produced two smaller plays in December, Toy School and A Charlie Brown Christmas and performed in the Family Life Center of First United Methodist Church right next door. We opened year two with 80 students on the roster plus another 30  students from Adventure Club. As Christmas approached we were very excited about what 2018 would bring for TMSOW!!! 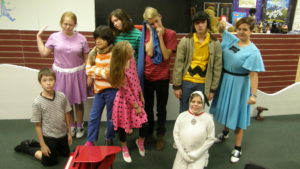 The cast of A Charlie Brown Christmas, 2017. 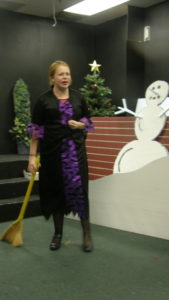 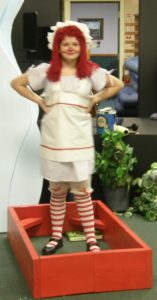 Well, the excitement balloon was quickly deflated and we started off the new year with some unpleasantries from our original landlords that carried over from our refusal to let them “take over” the studio in April of 2017. It took until the end of March but we were able to resolve the legal challenge placed before us and closed our original location (we STILL haven’t gotten all of our stuff back!). We took on extra space on a short-term sub-lease in City Centre and moved our business wholly to that site as of the end of March.

We organized our first performing group, The Ensemble, after the holidays and the 14 kids in that group presented four performances including Old Drum Days

(on a VERY cold Saturday morning!) and presented Dinner and a Show in our black box theatre. January saw us audition for our second season of summer theatre outdoors which we rebranded as “Theatre Under the Stars.” We brought back Sound of Music for a second season and also performed Xanadu Jr. and Disney’s The Little Mermaid Jr. again at the historical society grounds. 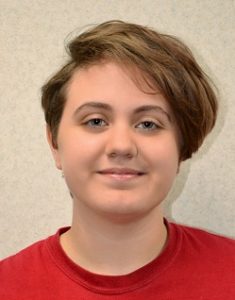 We were particularly blessed to find a new partnership with Starlight Theatre and were able to use their professional costumes and sets from their earlier production of Xanadu. In the process we made several new theatrical friends around the country adding much needed costumes to our inventory through gifts and many set pieces for Little Mermaid. We took on additional storage space in the attic area of City Centre in order to store our growing inventory of theatrical equipment, supplies, and costumes. We were also blessed to make a very small profit on the 2018 summer theatre season and, through the generosity of our audiences between Dinner and a Show and Theatre Under the Stars we have been able to establish a scholarship fund for deserving kids! We awarded our first theatre participation scholarship to Karlie Knowles who has been one of our stand-out young performers in 2017 and 2018. We are looking forward to continuing to award participation scholarships in both theatre and music as we start year three with a little under $1,000 in our scholarship and financial assistance fund!

Under the Sea from 2018’s production of The Little Mermaid Jr.

Not every step along the way has been positive, but in spite of it all we have persevered and the road ahead looks bright! We are excited about starting up Dave Simon’s KIDZ ROCK program here this new year along with PRINCESS BALLERINAS. We recently started a remodel of our studio in City Centre with a new lounge and business area for parents. We are also working to upgrade our private lesson instructional area by turning what has been our costume and prop storage room into a teaching studio and expect to have that ready to occupy by Labor Day. We’ve moved my grand piano back into the “green room” where our organ resides and Mr. Jim now teaches out of that room.

We’ve started the process of upgrading our pianos yet again with the sale of the baby grand which was previously located downstairs. A replacement grand piano is in our near future along with a set of electronic pianos for use in offering piano classes. Since we closed out the summer theatre season we’ve had a team of students working together to read and review possible plays for this coming year and we recently announced that we will be doing Freaky Friday One Act, Madagascar a Musical Adventure Jr. and Thoroughly Modern Millie Jr. in 2019. We will present a new version of A Christmas Carol (possibly the world premier!) for Dickens Fest and are bringing back Charlie Brown Christmas again in December. 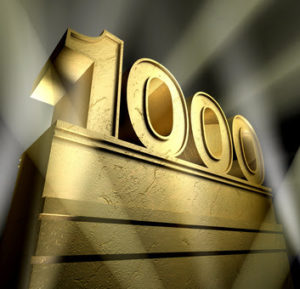 On a VERY exciting note, we finally hit 1,000 “likes” on our Facebook page in early August! As I write this we’re closing in on 1,025 “likes.” We’ve also had several new theatre kids and Kidz Rock kids come on board as a result of the greater promotion that Facebook now gets for going over 1,000!

So, all in all, in spite of 2018 presenting us with a lot of challenges that really tried our patience and resolve, I’m pleased to say that we’re STILL here and while we will still have some challenges, the future looks bright for the studio. We thank God for many answered prayers particularly this year and hope that He will continue to bless the studio in the months and years ahead!