The Music Studio of Warrensburg and Phoenix Productions

Theatre Under the Stars!

Thank you Warrensburg for coming out and supporting the 2019 season of Theatre Under the Stars! Special thanks to our friends at First United Methodist Church for hosting us in 2019. We look forward to returning in June of 2020. We will also debut our own indoor theatre with this season and know that our audiences will enjoy coming to shows there!!

Disney’s Moana JR. is a 60-minute musical adaptation of the 2016 Disney animated film, bringing the adventures of Moana and her village of Motunui to life onstage. Moana JR. features all the beloved songs from the film, written by Tony®, GRAMMY, Emmy, and Pulitzer Prize-winning composer Lin-Manuel Miranda, Opetaia Foa’i, and Mark Mancina, including “How Far I’ll Go,” “Shiny,” and “You’re Welcome.”

This thrilling and heartwarming coming-of-age story follows the strong-willed Moana as she sets sail across the Pacific to save her village and discover the truth about her heritage. Moana and the legendary demigod Maui embark on an epic journey of self-discovery and camaraderie as both learn to harness the power that lies within. With empowering messages of bravery and selflessness, Moana JR. is sure to bring out the hero within each of us.

Celebrating the rich history of Oceania and based on the beliefs and cultures of the people of the Pacific Islands, Moana was developed in collaboration with an Oceanic Trust – a group of anthropologists, cultural practitioners, historians, linguists, and choreographers from the Pacific Islands. The same respect and attention to detail used to develop the film was carried forward in the creation of this stage adaptation. Theatre Under the Stars and Phoenix Productions is pleased to be among the first theatre companies to present Moana Jr and bring this new musical to Warrensburg!

We Will Rock You – Performances Postponed

VENUE: TO BE ANNOUNCED    TICKETS ON SALE NOW! 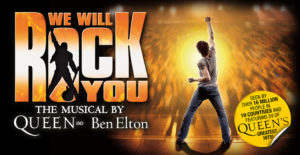 ANY WAY THE WIND BLOWS!

Take a journey into  the future where GlobalSoft rules the iPlanet!

“The show is live, dangerous and more than anything else: it rocks!”  Brian May, Queen

WE WILL ROCK YOU tells the story of a globalized future without musical instruments. A handful of rock rebels, the Bohemians, fight against the all-powerful Globalsoft company and its boss, the Killer Queen; they fight for freedom, individuality and the rebirth of the age of rock. Scaramouche and Galileo, two young outsiders, cannot come to terms with the bleak conformist reality. They join the Bohemians and embark on the search to find the unlimited power of freedom, love and Rock! (CREDIT: www.queenonline.com)

Tickets are available in advance from any cast member, online at www.tututix.com/tmsow, or at the theatre. Tickets for all shows are $10.00 per person. Children under the age of 12, $5.00 per person.
PURCHASE TICKETS

Outdoor productions are subject to the whims of Mother Nature. In the event of rain-out, tickets will be honored at any other show of your choosing during the summer season. Tune into 1450 KOKO for rain-out information when weather threatens the area. Start time may be delayed up to 30 minutes if storms are expected to be clear of the area by that time. All decisions to delay, postpone, or cancel a performance are made with the safety of our cast and crew members as our priority.

Tickets are non-refundable but may be exchanged for another performance by bringing them to the ticket kiosk prior to any show.