Any Way the Wind Blows… Just Be Yourself!

I’ve always loved the music of Queen and, yes, when Bohemian Rhapsody was first released my friends and I rolled down the car windows, sang along, and (just like Wayne and Garth would do 20 years later) we banged our heads during that massive guitar solo!

When I first saw We Will Rock You three years ago at an area high school it seemed like a really bad story looking for some really good music. In that aspect it won me over and I thought “we HAVE to do this show sometime.” Of course with the release of the Freddie Mercury biopic “Bohemian Rhapsody” the music of Queen has become very popular again (not that it ever really WASN’T!)…

Lately I’ve spent a lot of time thinking about the every-changing fabric of our nation – the great political divide we have, the staunchly polarized views on abortion, the tendency of people to bash others who don’t share their ideology or beliefs and so on.

Now, let me quickly say: I am not going to express nor do I intend in any way to impose my values, beliefs, political views, etc. on you here so relax. 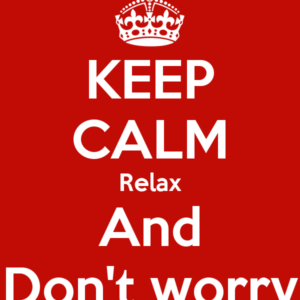 However, this afternoon I was listening to a theatre teacher/director friend of mine explaining to her cast why it wasn’t OK to just “run the building” while rehearsal is going on. The salient fact that came out of that talk was simple: the world ain’t the same as it was when we (I’m counting myself in this!) were kids. But what’s this got to do with being yourself, ya ask?

Nothing, really! It was a conversation that made me really take a hard look at society and how much things have changed but, as the old saying goes, the more things change the more they stay the same. Just because we all have idyllic memories of where and how we grew up doesn’t mean that there weren’t things going on that people widely and vocally disagreed with. I can think of at least one: The Vietnam War. It’s something I remember quite clearly because when I hit high school it was still going on and young me were still being drafted for military service. At age 16, I lived in fear of getting drafted and being sent to Vietnam! Fortunately, peace was finally reached and the government ended the draft in favor of the all-volunteer army. I still remember going to the post office and registering for selective service and still worrying about it!

Now, as a kid I was a little different than the other boys… First, I was terribly uncoordinated. Whenever I watched Lucy try to catch the baseball in Peanuts and watched her miss it, you could just as easily have drawn ME in that frame and put my name in it. Honestly, in all of the years of having to endure the legalized, daily torture that masqueraded as “physical education” I only EVER caught one high, fly softball and it SO shocked the guy that hit it at me thinking that he’d certainly score at least two or three complete circuits of the diamond knowing that it was a 1000-to-1 (actually, Jim, the odds were 98,878 point 362 to 1. “Never tell me the odds, Spock!”). 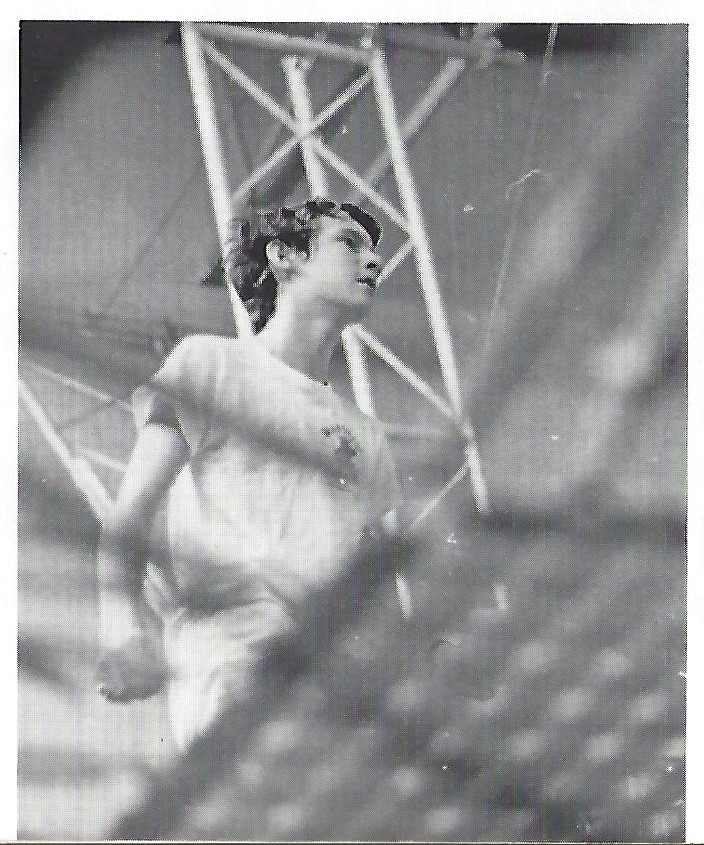 Point being, I was not blessed with athletic capabilities until long after high school. While in high school I was a band geek, orchestra boy, choir and theatre nerd and I was hopelessly saddled with the curse of being identified as being gay as a result (the truth was that  I was straight as an arrow and boy, was I glad when I FINALLY got my first girlfriend!). So, I spent a lot of time alone and in figuring out who I was I finally embraced my own individuality. I donned a tri-cornered hat found in a box of costume stuff in the stage flys of the auditorium and proceeded to wear it as my personal badge of honor. On more than one occassion my hat was confiscated by Mrs. Porter and Mr. (Rod) Cameron – who will undoubtedly read this blog and recall this daily reparte! Somehow, it always managed to find itself back to the box of costumes and the next day I would sneak backstage and don it once again to go tip at a few windmills and get a few laughs! After all, if they were going to make fun of me, I decided, why not just embrace it and go whole hog, eh? 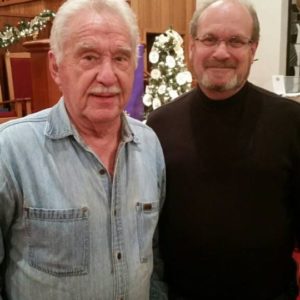 I thank my friend Doc Severinsen (and I’m proud to have gotten to know him personally a couple of years ago!) for showing this goofball nerd-geek that flauting your individuality was perfectly fine. Now, I seriously doubt that I would have gone to school in a look-alike Doc Severinsen “peacock leisure suit” but perhaps I would have if one could have been found backstage!

But, I digress… This blog entry is about being yourself and being true to who you are.

Incidentally, that’s the REAL story in We Will Rock You, too! It’s about being brave enough to buck the system and go against the crowd. Galileo and Scaramouche refuse to give in to societal pressure and end up becoming the force that changes an entire iPlanet! We first meet them as they are being ridiculed for being different than everyone else and follow their journey of discovering who they truly are. Of course the end up leading the rebellion to bring back music, specifically Rock and Roll, and bring the Globalsoft empire crashing down.

Now, I wish I’d have done this intentionally, but we programmed Moana Jr this season and it, too, is a voyage of discovery of who Moana and Maui are and it’s not necessarily what their parents/friends think or that it requires a magical hook to bring out! Moana’s desire to leave her island and find what’s out there lead her to meet Maui, a demigod sorely in need of help finding his way once again. Moana pushes, goads, begs, and eventually demands that he live up to his billing as a hero and set the world aright by returning what he had stolen from Te-Fiti and ask her forgiveness. Leading, of course, to his own, personal flurry.

I mean, ummmmmm, redemption and a second chance to be the hero and example for the people of the Pacific Islands to follow!

None of the characters in WWRY or Moana could find their way on their own. They were all afraid to take that first step to being who they truly are and what they could be. We find fear, cowardice, and anger which turn into courage, friendship, and love. Why? Because they embraced their individuality and found that by being who they truly were inside that they found happiness and purpose for their lives.

That’s a lesson we can all learn. It doesn’t matter what it is that makes you unique. It can be anything you wish and hope for. Just reach out and take a chance and let the chips fall where they may! Haters gonna hate… You can’t change that, it’s a path they have to choose for themselves just like the path you have to choose for yourself.

Being different is OK.

A much wiser man than me was sitting in a small chair on a small stage greeting his fans. A small girls walks right up out of the group of children sitting in front of the stage and says “Mister Rogers, I need to tell you something. I like you very much!”  Now Fred Rogers could have gone on and politely brushed the child off with a simple ‘thank you’ but he took time to stop and acknowledge her by saying “Well, I like you very much, too!” and gives her a hug.

The importance of feeling loved and acknowledged that you’re important is all about saying to someone, as Mister Rogers would say, “I like you just the way you are!”

Don’t be afraid to take that first step on your journey of uniqueness. Hey, we’re ALL on that same journey. I think the world wouldn’t be nearly as much fun if we were all the same. What about YOU?”

Wouldn’t it be great if everyone from politician to policeman to person walking down the sidewalk could  just remember to like everyone just the way they area? 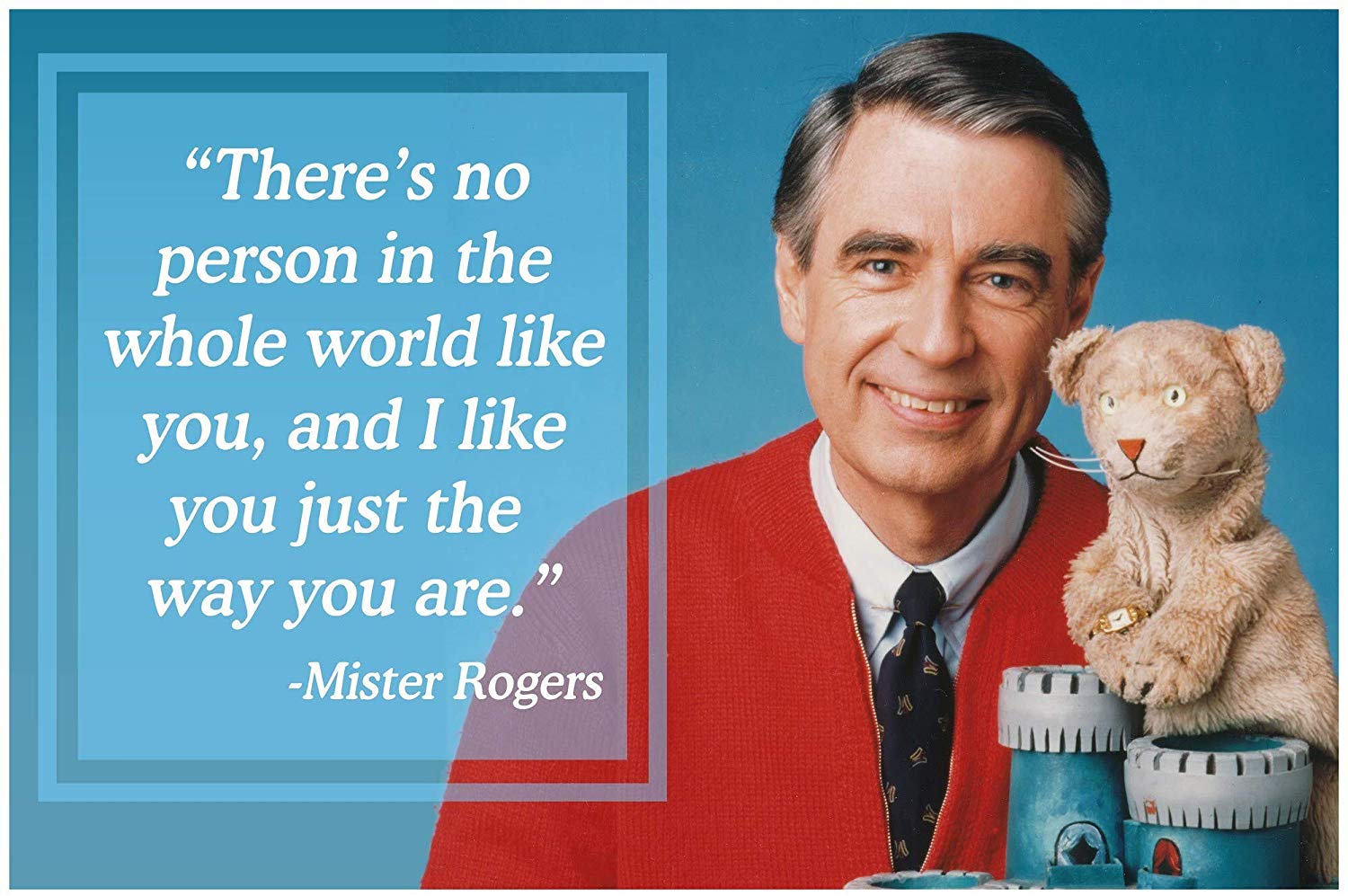